Mourinho moves away from the January transfer market

The Tottenham coach was questioned about his first few weeks at the English club and how he will face the winter market. Mourinho preferred to focus on work.

Tottenham decided to hire Mourinho in a big bet after Pochettino's exit and they want to make a champion club with the Portuguese coach, who wants to work hard after not having been able to have a preseason with them.

"I want to work. I am going to have time to work that I didn't have before because I complain every day to my staff about the frustration of wanting to do some kind of training and I can't. I want to work. That's why I like preseason," said the coach before the match against Wolverhampton.

Mourinho didn't want to think about the transfer market and about if he lacks a player or two in his team, but he also didn't rule out that he was going to look for reinforcements in January.

"In January we are going to have a little more time and depending on the week of February in which we will not play in the Premier League we will have another week. I want time and I want everything to work," he said. 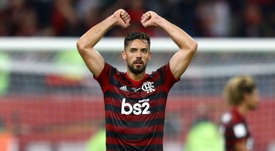