Ciro Immobile and Sergej Milinkovic-Savic struck in the second half as stuttering Lazio overame Genoa 4-2 on Wednesday to book an Italian Cup quarter-final with Inter Milan.

Lazio enjoyed a bright start at the Stadio Olimpico and were off the mark on 20 minutes when Filip Djordjevic sprung the offside trap to meet Felipe Anderson's through ball and fire into the roof of the net.

Djordjevic's first Lazio goal since April 2016 augured well for the hosts, but misfortune followed instead.

When Lucas Orban pulled Djordjevic down from behind, the penalty was given but Anderson's tame effort was easily parried by Genoa 'keeper Eugenio Lamanna.

Although Goran Pandev's drive at the other end inched wide of the top corner, Lazio doubled their lead 10 minutes later, Wesley Hoedt unleashing a bouncing drive from 30 yards out that beat Lukas Zima.

But Lazio were soon back to earth with a bump.

Mauricio Pinilla curled a superb shot past Lamanna and into the far top corner five minutes before half time and when Isaac Cofie's drive took a deflection Pandev pounced on the loose ball to pull Genoa level.

Lazio almost fell victim to a Lucas Ocampos screamer that hit the upright shortly after the restart, but the hosts restored their lead in spectacular fashion.

Milinkovic-Savic had come off the bench to replace Lombardi on the hour and when a poor clearance fell kindly he controlled with his chest before volleying home from seven yards.

Pinilla came close to levelling with an overhead kick that was just off target.

But Lazio secured the points on the counter minutes later, Jordan Lukaku setting Immobile up for a fine finish on 75 minutes.

Earlier, Cesena forward Karim Laribi sent parent club Sassuolo crashing out of the competition with a late winner in a 2-1 upset that sent the second division side into the last eight.

Sassuolo were off to a flying start against the current Serie B strugglers when Lorenzo Pellegrini tapped home the rebound from Matteo Politano's strike after just four minutes at the Mapei Stadium.

But their hopes of hanging on for the win were upset in three second-half minutes, Ciano beating Sassuolo 'keeper Gianluca Pegolo from the spot nine minutes from the end and Laribi, who is on loan from Sassuolo, sweeping a dramatic winner past Pegolo.

Cesena will now meet either Roma or Sampdoria in the quarter-final after their tie at the Stadio Olimpico on Thursday.

On Tuesday, Inter Milan edged into the quarters with a 98th minute, extra-time winner against Bologna (3-2).

Napoli will face Fiorentina in the quarter-finals, when Juventus host AC Milan, who have beaten the Cup holders twice already this season, in the league and in the Italian Super Cup final. 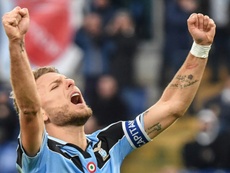 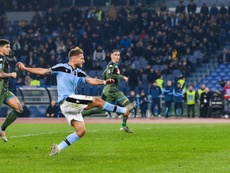 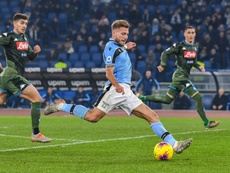 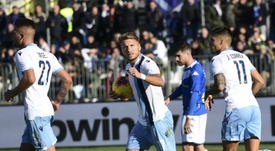