Here we take a look ahead of the Premier League clash between Leicester City and West Ham United at the King Power Stadium.

Leicester: The home side have had a decidely mixed start to their Premier League campaign, and faced a rampany Arsenal side in their last outing to come out 3-1 losers. They will be confident of turning it around on home turf.

Club captain Wes Morgan is serving a ban so will not feature, while winger Demarai Gray could feature after four weeks out. Jamie Vardy is a potential doubt, but should be okay to feature.

West Ham: The London-based team got off to a terrible start to the season, and have not much improved despite clinching a win over Man Utd before the international break. They know they need to do better, and will see this as an opportunity to show their improvement.

“Arnatuovic is a great player, he’s a striker who can keep the ball, has fantastic control with the ball and he can make the difference, but all the team can give good spirit and can give good moves.

“They are always ready to fight and to control the game, they have a lot of good players with a fantastic manager also. We need a strong game against this team. They are improving.”

West Ham manager Manuel Pellegrini on the test Leicester will pose his team:

"As always, in every game of the Premier League it is a difficult one, all of them are because the teams have similar players, money to buy good players and Leicester is no exception.

"They have very good players, they continue working in one way that for me is a very good way. They are a good team."

Claude Puel once faced Manuel Pellegrini's Real Madrid side in the Champions League while at Lyon, and beat them 2-1 over both legs.

Eight of Leicester's last nine Premier League goals against West Ham have been scored in the first-half.

West Ham won the most recent meeting between the clubs in May 2018, but haven't won back to back away league matches against Leicester since April 1997. 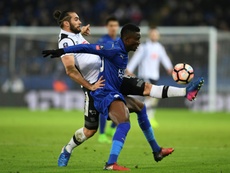 Amartey potentially out for the season with a serious ankle injury 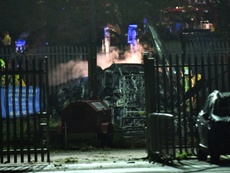 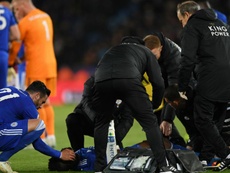 Puel hopes Amartey's injury isn't as bad as it looked 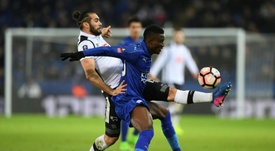 Amartey strechered off with nasty injury against West Ham

Ndidi fired in late to equalise for Leicester