Eintracht Frankfurt caused an upset in the DFB Pokal final, beating Bayern Munich 1-3 in dramatic fashion to secure the German cup for the first time in thirty years.

The cup final was billed as the start of a new chapter for both teams. As Jupp Heynckes prepared for his last game in charge of Bayern Munich, Frankfurt boss Nico Kovac was also saying goodbye to his team, as he prepares to take over at Bayern next season.

The obvious favourites going into the final were Bayern, due to their dominance in Germany, and the fact that they recently won the Bundesliga, but Frankfurt shocked everyone when they opened the scoring early on.

Nico Kovac's side scored in the 11th minute, capitalising on a sloppy mistake from James Rodriguez. The loanee was complacent on the ball in his own half, and Kevin-Prince Boateng pounced on him, stealing the ball in the Bayern half. Boateng slotted a lovely ball through for Ante Rebic, who showed great strength to power into the box. He hit a fine finish into the bottom left corner, showing great accuracy to put it past Sven Ulreich.

The goal made it 0-1 to Kovac's team, giving them something to defend early on, and they held onto this lead resiliently throughout the first half, despite an onslaught from Bayern. Kovac's side went in at half time with a slim advantage, but Bayern came out of the blocks quickly in the second period, and equalised early on.

- Lewandowski comes up with the goods -

The equaliser came in the 53rd minute, and was created by Joshua Kimmich, who drove down the right after being laid off by Niklas Sule. The defender found space and cut a ball back into the box, finding an oncoming Robert Lewandowski. The Pole stretched himself to meet the ball, slotting it to the right of Lukas Hradecky to bag his 41st in all competitions this season.

The game opened up after the equaliser, with both sides pushing for a second, but it was Frankfurt who found the next goal, bagging in the 82nd minute. The third goal of the game came after Rebic chased down a long ball, and used his strength once again to shake off the two Bayern centre-backs, before dinking a wonderful finish over Sven Ulreich for his second of the game. As he ran off to celebrate, the Bayern players surrounded the referee claiming a handball in the build-up, and the official sent it to VAR, but the on-field decision stood and Frankfurt led with little time left to play.

Although this goal was dramatic, the final goal of the game was even more controversial. Frankfurt made it to the 94th minute without conceding, but when Bayern earned a late corner, Sven Ulreich piled forward and the pressure was on. The delivery came on, and was cleared, but Bayern were incensed at what they saw as a foul on Javi Martinez in the box. Again the referee took it to VAR, and again Bayern were dismissed, but this time it seemed the decision was wrong.

Munich were awarded another corner instead, and Ulreich stayed up, which turned out to be a mistake when Franfkurt cleared again and chased it down on the break. Mijat Gacinovic sped after the ball, and he managed to outstrip the Bayern players, finding himself with an open goal. The Frankfurt man passed it in to make it 1-3, and it was the last kick of the game.

The game wasn't the fairytale end to Jupp Heynckes' season that was expected, but there will be mixed feelings for both sides. Nico Kovac gave Frankfurt a great parting gift, winning the cup that he lost out on in the final last year, but he also showed Bayern fans what they will be getting when he takes over. Heynckes will be upset over the controversial nature of the result, but Frankfurt played with heart, and they deserved the win. Munich will have to make do with just the one trophy this season. 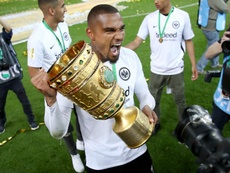 Boateng: Bayern should've had a penalty 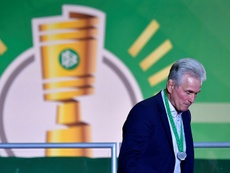 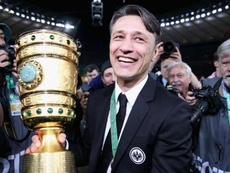 'Bayern should have had a penalty' 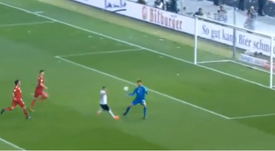 Lewandowski's 41st goal of the season levelled the final

Frankfurt shocked Bayern with an early goal in the final