The 34-year-old South Africa midfielder struck on 55 minutes from outside the box with a shot that went over the wall and above goalkeeper Jackson Mabokgwane into the net.

Fellow international Sibusiso Vilakazi gave defending champions Sundowns the lead on 15 minutes in Pretoria with a goal created by the brilliance of Uruguayan Gaston Sirino. A perfectly weighted backheel from the South American set up Themba Zwane for a close-range shot that Mabokgwane parried into the path of Vilakazi, who fired home.

Celtic captain Ndumiso Mabena silenced the vocal home crowd on 30 minutes by running onto a loose ball and beating Uganda goalkeeper Denis Onyango with a shot into the far corner.

"This was a match we could not afford to lose," said Sundowns coach Pitso Mosimane. "At this stage of the season every point is precious. Celtic are a good ball-playing team who created a lot of problems for us, but winning is part of our DNA."

This was the first of three matches in three competitions within 11 days for 2016 CAF Champions League winners Sundowns. They host third-tier Vaal University of Technology on Sunday in a South African FA Cup last-16 tie then tackle Al Ahly of Egypt away on February 29 in a Champions League quarter-final.

Meanwhile, title long-shots Bidvest Wits dropped two valuable points when held 2-2 at home in Johannesburg by Highlands Park, who levelled on 86 minutes through Namibian Peter Shalulile. Chiefs have 45 points, Sundowns 41, Orlando Pirates 39 and SuperSport United and Wits 34 each with the number of remaining fixtures for the contenders varying between eight and 12. 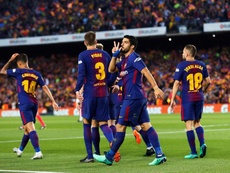 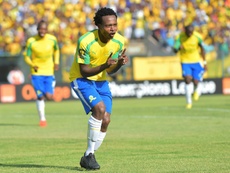 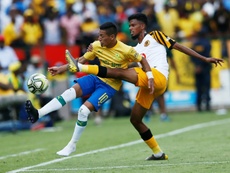 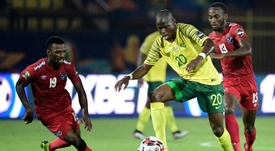