Everton and Richarlison also netted in a comfortable 3-1 victory over Peru at the Maracana stadium in Rio de Janeiro. Paolo Guerrero briefly drew Peru level in the 44th minute and Jesus saw red for the hosts.

Peru started the better of the two and Christian Cueva gave Brazil an early scare when he struck a free-kick just wide from 30 yards out in just the second minute. Tapia then hit an effort off target four minutes later, but the opening 15 minutes were very stop start and the teams were unable to get into any kind of rhythm. After 15 minutes, Brazil took the lead with almost their first chance of the game.

Jesus received a long pass on the near side, he beat Trauco before Everton volleyed home to send the Maracana erupt. It was Everton's third goal of the tournament and the 23 year-old Gremio player showed once again why big European clubs are after him. Brazil took charge after that and Peru faced the daunting task of scoring against Brazil, something which no team had done in this tournament. Coutinho hit wide after Firmino made a great run down the far side in the 24th minute, but three minutes afterwards, Guerrero headed over a Yotun free-kick.

Brazil continued to dominate and Firmino headed a fabulous Sandro cross over the bar after jumping above Trauco in the 36th minute. However, five minutes later, Peru got a penalty out of the blue. Cueva and Flores played a lovely one-two and then Cueva saw his cross intercepted by Thiago Silva's outstretched arm. It was a clear penalty which was confirmed after a VAR pitchside review and Guerrero made no mistake from the spot.

The Peruvians' joy was short lived though as Gabriel Jesus put Brazil back in front on the stroke of half-time. Firmino dispossessed an opponent, Arthur then picked up the loose ball and ran with it before feeding Jesus who finished the move in style. Paolo Guerrero was in tears on the pitch at half-time after the goal and had to be consoled by his teammates. Given the second half display, it looked like Peru never recovered from it.

Alves and Coutinho both tried their luck in the opening minutes of the second period with Coutinho's just flying past the far upright. The hosts continued to keep the ball and were in complete control for the rest of match. Firmino squandered an opportunity after good build play between Everton and Sandro saw the latter put in a great cross, but the Liverpool man could not hit the target. Finally, 17 minutes into the second half, Peru got a good sight of goal.

Flores got the ball and passed for Cueva who beat three or four players, but his ball to Guerrero went just behind him and the chance was spurned. That made the Brazilians become a bit shaky in defence and 20 minutes from time, they lost Gabriel Jesus to a second yellow card. He jumped up for the ball and caught his opponent with his side as he jumped. It was a clear foul, but the second yellow could have given. A furious Jesus apparently tried to damage the VAR equipment even though the VAR could not intervene and he had to be pulled away by various teammates.

Peru though hardly made use of their extra man. In the 20 minute spell, they just had one good chance. In the 74th minute, Peru saw a corner partially cleared and Edison Flores saw a powerful effort from inside the D fly just wide of the goal. It was an incredibly disappointing period of play from a Peru perspective as time went by with Brazil controlling the ball and lots of niggly fouls being committed.

Jesus was sitting on the dressing steps in tears after his debatable second yellow, given by a rather inconsistent referee, but he had no reason to worry. In the 89th minute, Zambrano barged into and blocked off Everton and the spot kick was awarded. The Chilean referee was called over for another look, but he stuck with his on field call and Richarlison sealed the game with a well taken penalty. Gallese went the right way, but it was in the corner.

Gabriel Jesus was still in tears as the final whistle sounded, but they quickly turned to tears of joy as the players and invaded the pitch and celebrated the famous victory on home turf. There was no repeat of the famous defeat to Uruguay in the 1950 World Cup and Peru were left thinking about what would have happened if they had not conceded on half-time. That said, it was their best performance at a Copa America for 44 years. For Brazil, with players like Everton and Richarlison, it could well be the start of another golden generation of players. 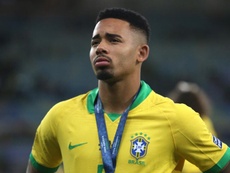 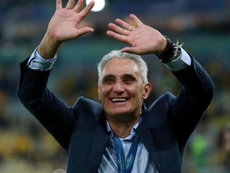 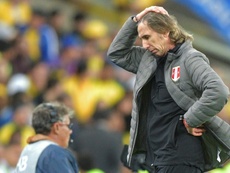 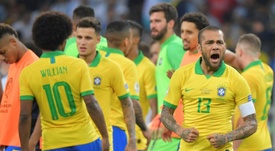