James fan club in Qatar for his Al Rayyan debut!

BeSoccer 1 month ago 3.6k
James made his debut for Al Rayyan. Screenshots/TVOneHD
James Rodriguez made his debut for Al Rayyan on matchday six of the Qatari league which saw his team face Al Duhail. The former Everton and Real Madrid player caused lots of excitement in the stands and several fans wearing Colombia shirts were present to show their support.
End
Temporada Regular. MD 6
Al-Duhail

James Rodriguez now knows what it is like to play for Al Rayyan, his new club. After leaving Everton, the Colombian got the eyes of many after moving to the Qatari league and we did not have to wait too long to see him in action. He did so against Al Duhail on 17th October 2021.

In the stands, he found the support of several Colombian fans who had scarves and shirts of the Colombia national team. Their aim was to show their support for the midfielder at his new club, where he will have less media attention on him.

The Colombian started the game and he was one of few recognisable faces in the starting XI. The coach put him in midfield to distribute play. Brahimi, N'Zonzi, Hatim and Mouafak were other players around him to help him out in his new adventure.

James' first goal for Al Rayyan could have actually come after three minutes when his team won a penalty. However, Edmilson Junior took it and scored to put his side in front. The game ended 3-0. 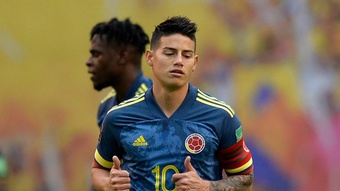 With or without James: Al Rayyan struggles and Blanc's job is at risk