An all-action display from Chelsea star Eden Hazard helped the 'Blues' to a comfortable 2-1 victory over Brighton at the Amex on Sunday as he demonstrated his ability to adapt to a false nine role.

The Belgian was preferred to Olivier Giroud up front for the trip to the south coast and he justified that decision with a goal and an assist in the first half.

Brighton went into the game with a dismal record against Chelsea and that looked destined to continue when Pedro opened the scoring with 17 minutes on the clock.

Hazard was the provider on that occasion, driving into the box and playing a wonderful low ball to the far post for the Spaniard to tap into the unguarded net.

Solly March looked like Brighton's best source of a response, but in Cesar Azpilicueta he appeared to have met his march as each raid forward was mey by an equally determind block or piece of defending.

Chelsea continued to enjoy more of the ball, but when their second goal arrived it was gifted to them rather than the fruits of their own labour.

Leon Balogun carelessly passed the ball straight to Willian and the Brazilian immediately sent Hazard racing clear in behind, with the Belgium international keeping his cool to calmly slot beyond Mat Ryan in the home goal.

The visitors had a chance to stick the knife in late in the half, but Antonio Rudiger could only power a header wide after getting the better of Lewis Dunk at a corner.

With that Sarri's men went in ahead at the break and they had a golden chance to extend their lead within five minutes of the restart as Hazard somehow failed to connect with Azpilicueta's low ball in from the right with only Ryan to beat.

Brighton came into the game a little more at that stage, with the introduction of Florin Andone changing their focal point in attack and giving them much more of a threat.

However, they were given a reminder that thay can't switch off defensively at any point against a team of Chelsea's quality when Marco Alonso, who has an excellent record against the 'Seagulls', rattled the post with a low drive.

Eventually Brighton's pressure told, March dragging them back into the contest as he stole in ahead of David Luiz to convert Bernardo's knockdown on the turn.

That strike gave Brighton belief, but a couple of attacking changes from Sarri ensured that Chelsea maintained their threat at the other end and it took good defending at the other end from Dunk to prevent substitute Ruben Loftus-Cheek from having a clear sight of goal.

There was still time for some late drama as Alonso was incredibly fortunate to avoid being sent off after dragging March to the ground as the winger looked set to race through on goal. As it was a free-kick and a booking were the decision, with March only able to fire over from the ensuing set-piece.

That allowed Chelsea to hang on, with Arsenal's shock defeat to Southampton at St Mary's meaning the 'Blues' have now put three points between themselves and fifth place. Brighton, meanwhile, remain 13th. 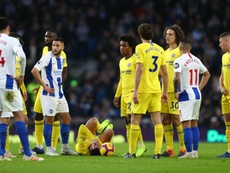 Sarri: Hazard injury 'only a knock' 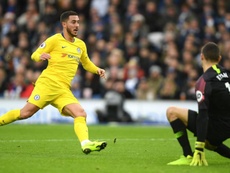 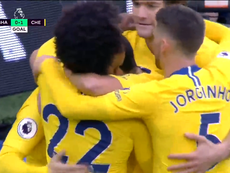 Hazard scored one and assisted another in an impressive first 45 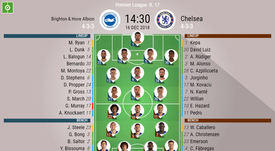 The teams are in!