Top-flight Hamburg were sensationally knocked out of the German Cup in the first round on Sunday, suffering a 3-1 defeat to third division side Osnabrueck.

Hamburg's misery was compounded by the fact that Osnabrueck played most of the game with 10 men, after defender Marcel Appiah was sent off on 19 minutes.

After taking the lead through a smash-and-grab goal from Halil Savran five minutes before half-time, the underdogs struck again through Marc Heider on the counter-attack with an hour played.

Though Bobby Wood pulled a goal back from the penalty spot, it was too little too late for Hamburg.

'We have to be very self-critical, Hamburg sporting director Jens Todt told Sky.

'We had one man more than them for 70 minutes and we still couldn't win; we defended badly.

RB Leipzig had an easier afternoon, reaching the second round with a 5-0 win against sixth-tier Dorfmerkingen.

Goals at the beginning of each half from Marcel Sabitzer gave Leipzig a 2-0 lead, before Timo Werner, Yussuf Poulsen and Naby Keita added three more in quick succession.

The top-flight club went behind to a Lars Lokotsch goal on 20 minutes, but goals from Niclas Fuellkrug, Kenan Karaman, Sebastian Maier and Martin Harnik saw them take a 6-2 victory. 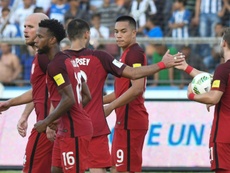 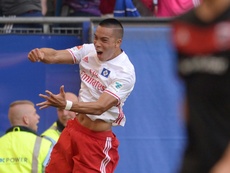 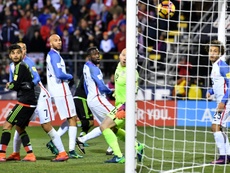 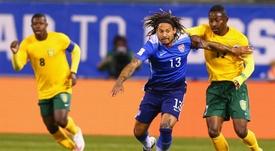 US open World Cup qualifying with 6-1 win over St. Vincent