BeSoccer 1 month ago 246
The incident occurred in the Premier Sports Cup quarter-final. Screenshot/Twitter/RitchieMulligan
Leigh Griffiths had a moment of madness in the Premier Sports Cup. A flare was thrown onto in the pitch by the St Johnstone fans and he kicked the lit flare into the stand with his left foot. Now, the Dundee player is set to face severe punishment.
End
Quarters
Dundee

The Premier Sports Cup quarter-final between Dundee and St Johnstone at Dens Park saw a very unsavoury incident take place. The away fans came into the stadium with flares and threw them onto the pitch while the match was going on.

Leigh Griffiths, a footballer on loan at Dundee from Celtic, was near one of the flares when it landed on the pitch. Several media outlets claim that Griffiths received insults throughout the whole game.

That is why the Scottish striker powerfully kicked the lit flare into the away fans with his left foot. The incident was picked up on mobile phone footage taken by the St Johnstone supporters and it was posted on social media.

The Scottish Football Association (SFA) are investigating the incident and the 31 year-old Scotland international could be punished.

That is not all. 'The Scottish Sun' says that the Police are also investigating what happened as kicking the flare into the stands could be considered to be an attack on the opposing fans.

The Scotttish police said that "there were no injuries and no complaints have been made to police at this stage. Enquiries into the matter are ongoing." This could mean that Griffiths avoids a more severe punishment.

On Thursday morning, Griffiths apologised for his actions and denied that he was trying to kick it at the St Johnstone supporters: "It was regrettable that the pyrotechnic ended up back in the stand as my intention was just to remove it from the pitch. Having just lost a goal I was eager to get the match restarted as quickly as possible and I would like to apologise for any distress caused by this action," he said.

The match was won by St Johnstone 0-2 thanks to second half goals from Shaun Rooney and Ali Crawford.

Diego Simeone gets back Savic for trip to Levante »
Related articles 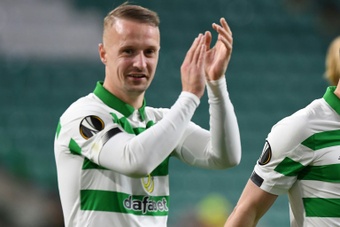