The 43-year-old Chalkias plays for second-division club Panachaiki and started their 1-1 draw against Panathinaikos in the Greek Cup.

He came out of retirement last year after signing with Panachaiki, then in the third tier, having not played since his final appearance with PAOK Thessaloniki on May 16, 2012.

Chalkias has played in 293 Super League matches during a career which included two spells at Panathinaikos and a stint at PAOK, the latter following a brief stop-off at Portsmouth.

He earned 32 international caps and was part of the Greece squad at three successive European Championships -- in 2004, 2008 and 2012 -- before retiring from the national team.

Chalkias was the backup to Antonis Nikopolidis before taking over as his replacement for Greece in 2008. 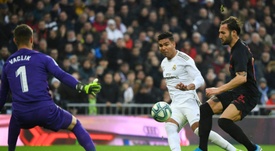