AC Milan head coach Marco Giampaolo defended his decision to bench Krzysztof Piatek, while he said Lucas Paqueta must learn to be "a little less Brazilian."

Piatek was named among the substitutes as Milan edged Brescia 1-0 at San Siro on Saturday to celebrate their first victory under Giampaolo.

Giampaolo made changes to the team that lost 1-0 to Udinese on the opening weekend, with prolific scorer Piatek dropped to the bench in favour of Andre Silva before he was introduced just past the hour mark.

The move sparked questions and Giampaolo explained his decision after Hakan Calhanoglu's early header settled the contest in Milan.

"Every game requires its own choices and in this one I chose Andre Silva and [Ismael] Bennacer," Giampaolo told DAZN.

"Milan have a strong squad, so I have the option to choose between various alternatives. I don't know if Andre Silva is leaving before the transfer deadline, but he is a professional, he is at our disposal and therefore he can play.

"Piatek is a great player, but if he is on the bench occasionally, the world isn't going to end. Players must think only of giving their all for Milan, then I'll make my decisions. Maybe I saw he wasn't quite as sharp during the week in training as some others."

Well done lads, on to the next

Brazilian midfielder Paqueta also started on the bench after he was named in Giampaolo's line-up against Udinese last week.

Asked about Paqueta – who was introduced for scorer Calhanoglu in the 65th minute – Giampaolo said: "In the way I see things, Paqueta can be an excellent mezz'ala.

"He just needs to learn to be a little less Brazilian at times, more solid and less playful.

"I think he can be a mezz'ala, but then in the final 10 minutes, in some situations, he could be used as a trequartista, but I like a player who is more attacking in his characteristics." 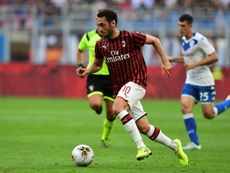 Calhanoglu scores only goal in victory over Brescia

First victory and points for Milan! 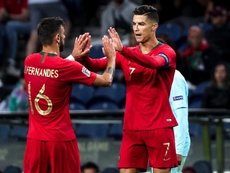 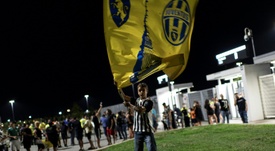