Troy Deeney was caught by a heavy challenge from Fulham's Timothy Fosu-Mensah, who issued an apology after the game on Twitter.

Timothy Fosu-Mensah apologised to Troy Deeney for what he insisted was an unintentional late tackle on the Watford striker in Saturday's 1-1 draw with Fulham.

The challenge was not only poorly timed but also high, catching Deeney on his right shin, but referee Martin Atkinson deemed a yellow card to be sufficient punishment.

However, the 20-year-old defender used his Twitter account after the game to make clear he had not deliberately caught his opponent, as well as praising Fulham for a second-half comeback that secured a point.

"Good result in the end! We managed to make amends for a poor first half and came back stronger in the second!" Fosu-Mensah tweeted.

"I want to apologise for my tackle on Troy Deeney. It was not intentional."

The visitors deservedly led at the break after Andre Gray's opener inside two minutes, with Watford unfortunate not to score more during a dominant display.

Fulham, however, were vastly improved in the second half, leading to an equaliser from Aleksandar Mitrovic, the Serbia international's fifth of the season.

Despite failing to hold on to their advantage, Watford boss Javi Gracia was pleased enough with the result, even if his players felt differently after the final whistle.

"After we scored early we created chances. We dominated, but we didn't kill the game," he told the club's website.

"I am happy still because I can feel the players sense it is not enough to get one point. They are hungry and that is very good." 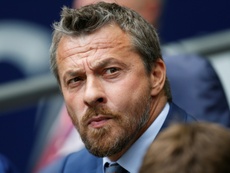 'We must stop conceding early' 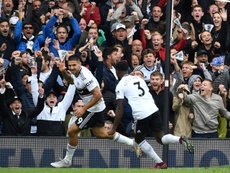 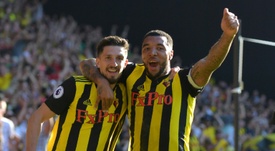 Deeney speaks out on fouling

All square in tough battle at the Cottage

Mitrovic stabbed Fulham back in to it