The Real Madrid player on loan at Sevilla last season, Sergio Reguilón, has made his way on to Carlo Ancelotti's Everton agenda. According to 'Sky Sports', the English side would offer around 20 million euros for the defender.

Real Madrid are preparing for 'Operation exit'. One of the players who could pack his bags is Sergio Reguilón.

Los Blancos want to balance the books with his transfer. And, as reported in England, Everton would be willing to pay a big sum for the LB.

'Sky Sports' affirm that the team led by Ancelotti would want the defender in their ranks. They would be willing to pay Madrid around 20 million to tie down the player.

Reguilón is under contract at Madrid until June 2023, although it seems that, at least for now, he doesn't have room in Zinedine Zidane's plans.

This season, the full-back played on loan at Sevilla. He played 34 matches, starting 31 of them. He scored two goals and got three assists.

The Premier League is knocking Reguilón's door. Now it remains to be seen if that supposed offer arrives at the Bernabéu and, in any case, if it seduces Madrid. 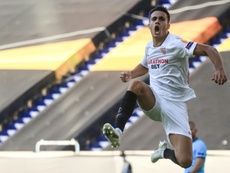 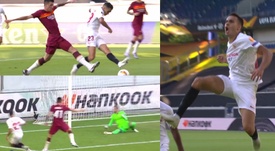 Reguilon: I feel loved at Sevilla