European Under-21 Championship: Spain and Germany off to strong start

BeSoccer 6 months ago 861
European Under-21 Championship: Spain and Germany off to strong start. AFP
Spain and Germany beat Slovenia and Hungary in their opening Euro U21 fixtures, while Italy and the Netherlands were both held 1-1.
End
Group B. MD 1
Eslovenia Sub 21

Spain and Germany eased to 3-0 wins over Slovenia and Hungary respectively in their opening 2021 European Under-21 Championship fixtures on Wednesday.

Holders Spain found Slovenia tough to break down before Javier Puado and Gonzalo Villar struck in the space of 108 seconds early in the second half.

Igor Vekic made eight saves to keep Slovenia in the game, but Juan Miranda added a late third to get Spain's title defence off to a positive start in Maribor.

Germany's clash with Slovenia's fellow co-hosts Hungary panned out in a similar manner, with the 2019 runners-up failing to find a way through until just after the hour mark.

Anderlecht's on-loan Manchester City forward Lukas Nmecha continued his fine form by powering in a header to break Hungary's resolve and Bote Baku, who assisted that goal, added a quickfire double to seal the win.

The other Group A fixture between Romania and the Netherlands finished 1-1 thanks to Andrei Ciobanu's impressive free-kick to cancel out Perr Schuurs' opener.

The Netherlands, competing in this tournament for the first time in eight years, had to hold on towards the end to claim a point against the 2019 semi-finalists in a cagey contest.

Wednesday's other match also finished 1-1, although Italy had two players sent off late on against the Czech Republic.

Gianluca Scamacca opened the scoring with a composed finish after 31 minutes, but the Czechs fought back well and levelled through an unfortunate Giulio Maggiore own goal.

Italy then had Sandro Tonali sent off six minutes from time for kicking out at Ondrej Sasinka, while Riccardo Marchizza followed in added time for a foul on Vaclav Drchal, earning a second yellow card.

The disappointing stalemate for the nine-man Azzurri leaves them two points behind early Group B leaders Spain.

Mentioned in the news story
UEFA EC U21

Dybala back in Juve's squad to face Inter »
Related articles 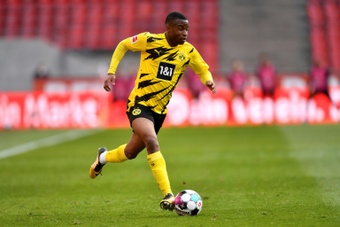