BeSoccer 1 month ago 4.1k
England's five years of Southgate. GOAL
Gareth Southgate had reservations about becoming England manager, but he has become one of the most successful bosses in the team's history.

It took the man in the waistcoat to turn the tanker. In a year's time, England will be at the Qatar 2022 World Cup with serious aspirations of bringing back the trophy. And while there are a number of key figures who have made that prospect realistic, nobody stands out quite like Gareth Southgate, who on Tuesday celebrated a five-year anniversary as manager.

Greg Dyke was a newly appointed chairman of the English Football Association (FA) when he declared in a famous 2013 speech: "English football is a tanker that needs turning."

He spoke that day of wishing to create an England team that could be successful on the world stage.

"The two targets I have for the England team are – one, to at least reach the semi-finals of Euro 2020 and two, win the World Cup in 2022," Dyke said. Many duly scoffed.

Nine years on, England have ticked one box, with Southgate's team finishing runners-up to Italy at the delayed Euros; now, a nation expects as his squad bid to match Alf Ramsey's 1966 heroes.

It was not Dyke who selected Southgate after Roy Hodgson's four-year reign ended and successor Sam Allardyce lasted just one game, an ill-fated choice.

Indeed, as Dyke left his post at FA HQ in the summer of 2016, he questioned the appeal of the England manager's job, specifically asking "why anybody would want it".

Southgate was unsure initially too, albeit for a different reason, saying the role "wasn't something I think I've got the experience for". But his tune soon changed, with Allardyce's reign ending abruptly after a newspaper investigation within weeks of his appointment and the FA needing a steady hand on the tiller.

Southgate made 426 Premier League appearances in his playing career – more than anyone else with zero appearances off the bench. He was therefore not used to being deployed as a substitute, but on this occasion he accepted the chance to step in as a replacement.

His credibility for the England post had been questioned, with former Tottenham and West Ham boss Harry Redknapp dismissive of the notion that Southgate would know all about the English system.

"Knows what system? The losing system? He knows the losing formula? I like Gareth Southgate, he's a great lad," Redknapp told BBC Radio 5 Live, "but what's he done?"

Egyptian striker Mido, who played under Southgate at Middlesbrough, tweeted: "I can't believe that in England they are talking about @GarethSouthgate to become the new Manager!! I hope he learned since the @Boro days!!"

Even former Three Lions midfielder Jermaine Jenas balked at the prospect of Southgate's three years as England Under-21 manager being a suitable pathway to the senior role, instead throwing his support behind Glenn Hoddle.

In a column for Yahoo, Jenas said of Hoddle: "I know he has been out of the managerial game for a long time, but I certainly think he would be a better option than Southgate."

From scaredy cats to roaring lions

"It's the same in all sport," Dyke said. "Really talented sportsmen can just freeze. That's what happens."

After the Allardyce interlude came Southgate's appointment as a caretaker coach, and British bookmakers swiftly rated him favourite to keep the job on a permanent basis, ranking Steve Bruce, Alan Pardew, Eddie Howe and Hoddle as next in line on the list of likely candidates.

As well as having managed the England Under-21 team, Southgate also previously held the role of head of elite development at the FA. Jenas might not have liked it, but getting not only a foot in the door, but both feet and an office to call his own, and the respect of a young generation of rising stars, made Southgate an obviously worthy candidate.

Wins over Malta and Scotland, and draws with Slovenia and Spain, earned Southgate an interview for the permanent post, and he impressed a selection panel that featured FA chief executive Martin Glenn, technical director Dan Ashworth and chairman Greg Clarke – Dyke's successor – to the point he was handed the job permanently on November 30, 2016.

Southgate has been a revelation: England reached the 2018 World Cup semi-finals, losing out to Croatia, before surging through to the Euro 2020 title match, a first major final since Bobby Moore led the team to World Cup glory.

Along the way, the man who was a scapegoat for England's Euro 96 exit, when he missed a crucial semi-final shoot-out penalty against Germany, has become a national treasure.

"Southgate, you're the one" sing England fans nowadays, while his uptake of a waistcoat on the touchline became a symbol of stylistic significance at the World Cup in Russia, sparking a rush of high street sales and analysis by the fashion media.

The England boss told the BBC: "If you had said to the players when I started at Crystal Palace that I was going to be upheld as the sartorial model for the country, you'd have been hooted out of the training ground."

How has he developed a new England?

Once Southgate was handed the job permanently, he was able to outline his manifesto. "When I played, particularly in 1996, there were captains through the team that were captains of their club," he said.

Harry Kane captains England but not his club, Tottenham. Southgate rates him as a leader par excellence. Jordan Henderson has built up years of experience in skippering Liverpool and is another England regular and vice-captain of the team.

In terms of leadership, England have no shortage of on-field generals, the ideal complement to their burgeoning crop of talented, freewheeling youngsters. This is entirely deliberate.

Southgate also declared he wanted a team "that excites the public, that the supporters like watching and are proud of".

A competitive record of 44 wins, 14 draws and 10 defeats in 68 games gives him a winning record of 64.7 per cent. Of England managers with more than one game in charge, that is second only to Fabio Capello's 66.7 per cent (42 games, 28 wins, eight draws, six defeats). World Cup winner Ramsey achieved a 61.1 per cent win record from 113 games.

Southgate has explored his options and given debuts to 50 players, the most since Bobby Robson, who handed first caps to 64 players during his eight-year tenure.

Of the debutants under Southgate, Jordan Pickford has played the most games (42), followed by Maguire (41), Kieran Trippier (35) and Jesse Lingard (32). There have been 14 players who have won just one cap to date in the Southgate era, but among those are a number of players who might realistically expect to win plenty more, such as Harvey Barnes, Nathaniel Chalobah, Conor Gallagher, Mason Greenwood, Dean Henderson, James Maddison and Aaron Ramsdale.

Others seem likelier to go down as one-cap wonders, such as Dominic Solanke, Nathan Redmond, Jack Cork and Lewis Cook. But Southgate has rewarded players in form, cultivating an open-door policy within the England camp that can only be healthy.

Twenty of the debutants have been aged 21 or under, with the youngest being Borussia Dortmund livewire Jude Bellingham, who was 17 years and 136 days old when he featured against the Republic of Ireland in November 2020.

In total, Southgate has capped 83 players to date. There should be many more to come, with the manager recently signing a contract extension through to 2024

Kane, who made his debut under Hodgson, has made more appearances than any other player (50) and scored the most goals (43) during the Southgate era.

That was the famous remark caught by documentary film-makers as Graham Taylor spluttered in frustration in the dugout at an England attack breaking down all too easily.

The game was a World Cup qualifier in 1993 against Poland, with David Bardsley lifting a long pass hopefully towards Teddy Sheringham, who could not nod the ball down into the path of Carlton Palmer. Taylor could not contain himself.

England's tactics were all too obvious then, subtlety not their strength, with overseas influences yet to seriously permeate the domestic leagues.

There has been progress in the years since, but even when Southgate came in, he felt England were too narrow-minded in some respects, saying he needed "to broaden the horizons" of his players.

"Because the lads see one league... they think we're the centre of the Earth and we're not," Southgate said. "That's what hit me. Other countries are quite happy to say nice things to us and then they pack us off home at a certain stage [of a tournament] and think, 'Good, we've got rid of them'. That's how it feels to me and I don't like it."

England perhaps still have some catching up to do, but Southgate is shifting the culture significantly.

This can be examined through the prism of World Cup qualifiers – Southgate's first campaign leading up to the 2018 tournament, and his latest, which saw England ease into the hat for next year's finals. In both campaigns, England played 10 games, winning eight times and drawing twice.

England are steadily learning to keep the ball and be patient, moving from 195 sequences of 10-plus passes in the 2018 qualifying campaign to 268 for the 2022 preliminaries, putting them second only to Germany among European teams, albeit Spain (253) in third place played just eight games.

They are achieving more high turnovers too, going from 82 in 2018 World Cup qualifying to 111 in their quest to reach Qatar 2022. In that aspect, England have jumped from ninth to third in Europe.

Hodgson's Euro 2016 squad contained players plucked exclusively from the Premier League, with his 23-man group including stars from 11 clubs.

Southgate's 26-strong Euro 2020 party contained representatives of 16 teams, including Trippier from Atletico Madrid and Bellingham and Jadon Sancho of Borussia Dortmund. Gone, for now, are the days of England squads being dominated by players from a small group of clubs.

The acid test comes at major tournament level, and to date Southgate's England are showing up on the big stage – at least until it comes to the crunch. They stood widely accused in both the Croatia semi-final and the Italy final of retreating into their shell, having taken the lead early in each game and then failed to build on the strong start.

That is something Southgate must address and surely will. This is a technically gifted England now, with a coach who has brought more sophistication to the role than many expected.

All that being said, there are still aspects of England's play that perhaps hark back to bygone days. They played 391 long passes at Euro 2020, more than any other side, although this should not be a serious concern given that was only marginally more than champions Italy (363), and semi-finalists Denmark (340) and Spain (339) were not lagging far behind.

Old habits die hard though and England remain the kings of the 'launch' – defined by Opta as "a long high ball into space or into an area for players to chase or challenge for the ball".

They hit 125 of these in the Euros, with the Czech Republic next on the list with 96. Just 27 of England's launches were judged to be successful, and Southgate may reflect on the fact Italy played just 52 such hit-and-hopes on their way to the title.

There is always learning to be done, advances to be achieved. Such data will be monitored by England, with a view to sculpting a winning tactical model in time for next November.

"I like Gareth Southgate, he's a great lad, but what's he done?" was Harry Redknapp's question five years ago.

Turns out, rather a lot in a short space of time. The tanker has turned. 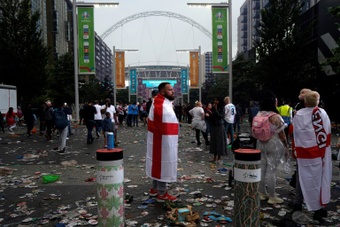 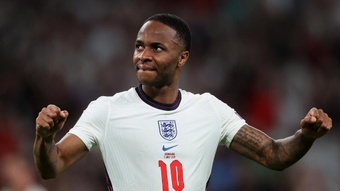 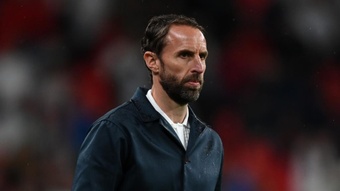 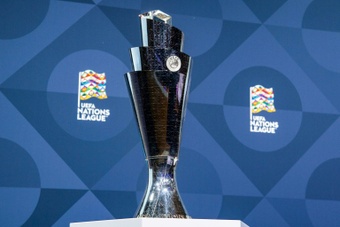 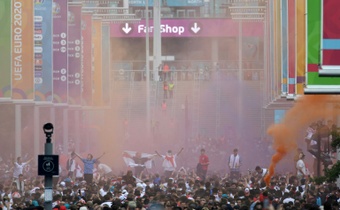