BeSoccer 13 days ago 1.3k
Dortmund without Haaland and Hummels in Lisbon showdown
Borussia Dortmund will be without both Mats Hummels and Erling Haaland when they head to Portugal for Wednesday's potential Champions League Group C decider against Sporting Lisbon.

Level on points with two games to play in the group stage, Sporting and Dortmund meet on Wednesday in a clash which could decide which of them joins group leaders Ajax in the knockout stages.

Yet Dortmund will be deprived of two of their best players in Hummels and Haaland as they look to steer their Champions League campaign back on course after back-to-back defeats.

Veteran defender Hummels is suspended after he was controversially sent off in Dortmund's 3-1 defeat to Ajax three weeks ago.

The club had said they would appeal the red card, but coach Marco Rose admitted last week that he did not expect the 2014 World Cup winner to be available.

"We all know that Mats is suspended in Lisbon," he said, and hinted that Dan-Axel Zagadou could take his place in central defence.

Haaland, meanwhile, has been out for the last four weeks with a hip injury.

Dortmund are hoping the Norwegian striker, who has nine goals in just six league appearances this season, will return to action in time for their top-of-the-table clash with Bundesliga leaders Bayern Munich on December 4.

Rose's side head to Lisbon in good spirits, having moved to within a point of Bayern with a narrow win over Stuttgart at the weekend.

Sporting have had longer to recover since their 2-1 cup win over Varzim last Thursday.

The victory was their ninth in a row in all competitions, a run which goes back to their last meeting with Dortmund, a 1-0 defeat in Germany in September.

Donyell Malen, who scored the winner for Dortmund in that game, is likely to lead the line again on Wednesday in Haaland's absence.

The 22-year-old Dutch talent is in good form, having netted his first Bundesliga goal with a blistering strike against Stuttgart on Saturday. 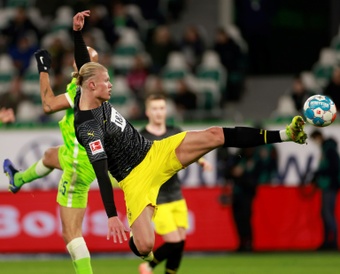