Memphis Depay scored a hat-trick including two penalties as Champions League semi-finalists Lyon began the new French season with a 4-1 victory over Dijon on Friday.

Dutch forward Depay bagged his first Ligue 1 goals since December, having missed the coronavirus-shortened second half of last season after rupturing knee ligaments just before Christmas.

"I'm really happy to have scored three goals tonight. It wasn't my best match personally. We needed to win and that's what we did," said Depay.

"It's a strange feeling going from one season to another very quickly," he added, with the game coming just nine days after Lyon's 3-0 loss to Bayern in Lisbon.

Lyon sporting director Juninho has said there will be departures before the end of the transfer window on October 5 as the club heads into its first season without European football since 1996-97.

Depay, along with Houssem Aouar and Moussa Dembele, have repeatedly been linked with moves but the 26-year-old insisted he is concentrating on helping Lyon make a run at ending Paris Saint-Germain's dominance.

"I'm focused on OL. I can dream of big clubs but I'm looking to do my best here," said Depay, who doesn't believe the lighter schedule this season is necessarily a plus.

"I don't think not playing in Europe is an advantage because when you play in Europe you get better."

Lyon, who finished a poor seventh last term, were without midfielder Aouar for their opening game of the new campaign after he tested positive for Covid-19 earlier in the day, and the home side fell behind to a first Dijon goal for Aurelien Scheidler.

Depay, the Lyon captain, equalised from the penalty spot after Ahmad Ngouyamsa barged Maxwel Cornet over as Rudi Garcia's side turned the game in their favour with three goals in the space of six minutes just before half-time at the Groupama Stadium.

The former Manchester United winger spun past his defender on the corner of the box and fizzed in a dangerous low cross that caused Dijon's Wesley Lautoa to poke into his own net and give Lyon the lead.Â

Seconds after the subsequent restart Depay struck again, Karl Toko Ekambi's deflected ball finding its way to the Dutchman who displayed great poise and skill to volley beyond Alfred Gomis from six yards.

Senegal goalkeeper Gomis produced a magnificent save to deny Depay his hat-trick on the hour as Lyon continued to attack freely.

England youth international Jonathan Panzo, who won the Under-17 World Cup alongside Phil Foden in 2017, came on for his Dijon debut in the second half two days after the defender's arrival on a three-year deal from Monaco.

The Chelsea academy graduate promptly conceded another penalty after a VAR review as he was adjudged to have clipped the heels of Leo Dubois.

Depay again converted by blasting home via the underside of the crossbar to seal his hat-trick on a memorable return to top-flight action.

Nine games are scheduled in Ligue 1 this weekend, with Marseille due to visit Brest on Sunday despite another three reported coronavirus cases at the club.

Title holders PSG's scheduled game at Lens on Saturday has been pushed back to September 10 following their run to the final of the Champions League in Lisbon. 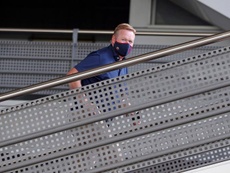 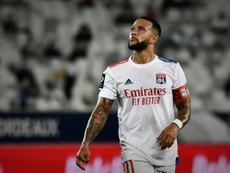 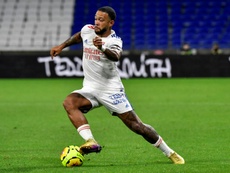 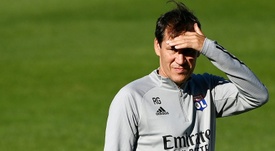