The coronavirus pandemic may have temporarily halted sport, but athletes' various high jinks kept them in the public eye this weekend.

Sports stars were coming to terms on Sunday with another day of being sidelined amid the coronavirus pandemic.

Competitions including the Premier League, the NBA and Formula One were off as sport attempts to combat the spread of the virus.

Without work to keep them busy, athletes were finding other ways to entertain themselves - and often posting evidence online.

Tyson Fury would not have been in boxing action this weekend, as it is just weeks since his stunning world heavyweight title defeat of Deontay Wilder, but he was still impacted by coronavirus.

The Briton had been set to run the Liverpool Half Marathon but was advised not to, amid the crisis.

That did little to stop Fury, though, who continued with the run at home instead, dressed as Batman with strength and conditioning coach Kristian Blacklock as his sidekick Robin.T

In the United States, Giannis Antetokounmpo has been vocal in bemoaning his boredom while the NBA is paused, but the world received evidence of how he has been using his time.

The Greek Freak's girlfriend uploaded a video of the reigning MVP playing Deep Purple's Smoke on the Water on guitar, and the Milwaukee Bucks ace replied: "If anyone wants a guitarist for their group, I'm free. Inbox me for booking."

His popstar girlfriend Perrie Edwards - a member of Little Mix - posted a video of the pair dancing at home with the caption: "Precautionary self isolation can be fun!"

Football's most famous popstar WAG had also featured in a social media post on Saturday.

David Beckham had been anticipating Inter Miami's first home match against his former club LA Galaxy before the 2020 MLS season was suspended.

Beckham instead took his family to see his expansion club's stadium, though, and wife Victoria was enjoying herself as the tannoy blasted out Spice Girls songs.

Robert Lewandowski and Gabriel Jesus shared clips of their workouts, but Dries Mertens' was a little different.

The Napoli star was filmed lifting a giant wine bottle in his exercises, posting the video with the caption: "My greatest advice in life, 'A little bit of wine is the solution to a lot of problems'."

And Barcelona B midfielder Riqui Puig joined a campaign to keep people in their homes in Spain, skilfully juggling toilet roll in an apparent reference to the stockpiling prompted by the virus. 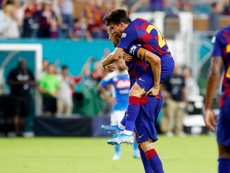 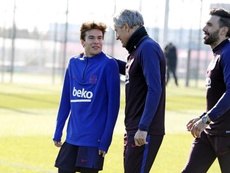 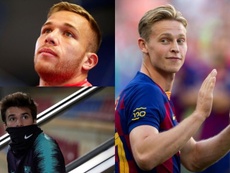 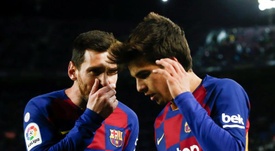