Copenhagen recorded a 2-1 win over Ajax at Telia Parken in the Europa League round of 16 courtesy of an Andreas Cornelius header.

Andreas Cornelius netted a second-half winner to help Copenhagen to a deserved 2-1 victory over Ajax in the first leg of their Europa League last-16 tie.

The towering striker made the difference with a superb header just before the hour mark after Peter Ankersen's sublime cross from the right, beating Matthijs de Ligt in the air to leave goalkeeper Andre Onana without a chance.

The Danish champions had previously gone a goal up through Rasmus Falk after just 27 seconds, only for Kasper Dolberg to score a controversial equaliser from what seemed like an offside position, but there would be no denying the home side in the end.

Copenhagen were brimming with confidence heading into Thursday's encounter following their superb home form over the past 18 months, last conceding in an official game at Telia Parken back in August 2016 and going unbeaten ever since a 3-2 defeat against Jablonec in August 2015.

Ajax, meanwhile, had every reason for optimism as well, having won five of their eight prior Europa League encounters this term and drawing the remaining three.

It was Copenhagen that dominated proceedings, though, and Cornelius' second-half strike would eventually prove to be decisive.

Copenhagen charged forward right from the start and needed less than a minute to open the scoring through Falk. The midfielder escaped the attention of Lasse Schone after a clever pass from William Kvist and beat Onana with a fine volley from a narrow angle.

The hosts continued to cause Ajax all kinds of trouble early on and Youssef Toutouh could have doubled his side's lead after a long throw-in from Kvist, blasting a shot just wide of the target after Federico Santander had headed the ball into his path.

The Amsterdammers slowly grew into the game and Dolberg restored parity in the 32nd minute with a sublime finish from what appeared to be an illegal position. Davy Klaassen sent in a fine cross from the right and the Denmark international did well to hold off Ankersen before volleying home.

Ajax made an encouraging start to the second half and could have grabbed the lead when the unmarked Schone got a chance to try his luck from the edge of the box, only for the experienced midfielder to aim yards wide.

Copenhagen had struggled to get going after the restart, but they went 2-1 up with their first chance of note after the break, Cornelius beating Onana with a strong header after outmuscling De Ligt in the 59th minute.

Ajax boss Peter Bosz brought on big-money signings Hakim Ziyech and David Neres in the closing stages of the game as the visitors went in search of an equaliser.

Klaassen was unfortunate to be denied by a fine save from Robin Olsen, before Dolberg had a goal disallowed in the 88th minute for a foul on Uros Matic as it ended 2-1. 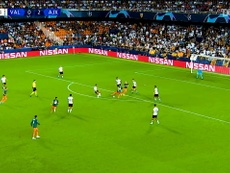 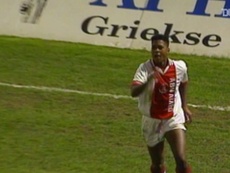 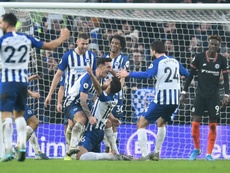 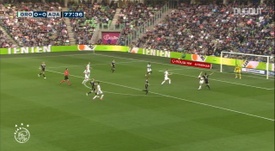