Club's vice-president chains himself to door of Argentinian FA!

After a 3-0 loss to Deportivo Madryn, vice president of Sarmiento de Chaco, Gerardo Escobar, decided to launch an extraordinary protest.

The vice president of Sarmiento de Chaco chained himself to the door of the Argentina Football Association's (AFA) offices in protest following a key defeat for his team. Bidding to be promoted to the second tier of Argentina's league structure, Sarmiento de Chaco slipped to a 3-0 loss away to Deportivo Madryn in the first leg of their play-off clash.

Gerardo Escobar opted to show his displeasure at the result by heading to the AFA offices on Thursday and securing himself to the federation's premises. Escobar had expressed unhappiness with refereeing decisions during his team's defeat to Estudiantes de Rio Cuarto earlier in the competition.

"They robbed us of the dream of getting promoted to the second division," Escobar said to TyC Sports. "We don't have any kind of answers [from the AFA]. We feel very bad and this is an extreme action. The AFA Court has to take action on this matter. We know that maybe there is no solution in five minutes. I will be here as long as necessary."

Later on Thursday, Escobar freed himself to halt the unusual protest. Estudiantes de Rio Cuarto player Juan Tejera appeared to suggest in a recording leaked last week that his team benefited from biased refereeing decisions. However, the 35-year-old has since claimed the audio was edited and clarified that the he was speaking in jest on the voice messages in any case.

In a statement issued via their Facebook page, Estudiantes said: "We reject such statements as false, injurious and disqualifying… in defence of the good repute of our institution." 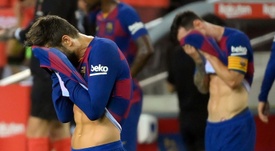