We take a look ahead to Thursday night's Europa League Group L clash between Chelsea and PAOK at Stamford Bridge.

Chelsea: Aside from a knock sustained by Eden Hazard, Maurizio Sarri has a fully-fit squad to chose form for the game and he is once again expected to rotate as he looks to keep his players fresh going into the new year. Emerson Palmieri, Davide Zappacosta, Cesc Fabregas, Gary Cahill, Ruben Loftus-Cheek and Olivier Giroud are all expected to get the nod.

PAOK: Aleksandar Prijovic is expected to lead the line for the trip to the English capital, whilst Mauricio could return alongside Pontus Wernbloom in the middle of midfield. Omar El Kaddouri goes into the game just one booking away from a suspension.

"I think I will make big changes to the side for tomorrow because in December we have to play 10 matches so now we need to change, regardless of the last result. In the Europa League group we had two targets, first was qualification which is achieved, the other one is to win our group so for this we need one point but we cannot think to play for one point or it is very easy to lose the match. So the target tomorrow is to win the match and be the first in our group, but of course we can also do this if we change seven or eight players."

"We are here to win. I hope we took a lesson from the previous game. We have to play perfectly until the final whistle. Every game is different. We have will to fight for a good result. Chelsea is a great team. We have to be focused and concentrated."

This season's previous meeting between the two sides was the first time they had faced each other in UEFA competition. Chelsea claimed a 1-0 win in Salonika.

Chelsea are unbeaten in five games against Greek opposition.

PAOK have a good record playing in London, having drawn 1-1 with Arsenal and beaten Tottenham 2-1 on their last two visits to the English capital.

The Greek side have progressed to the knockout stages in four of their last six Europa League campaigns.

The game will be PAOK's 41st in the Europa League Group Stage, only Salzburg and FCSB have played more. 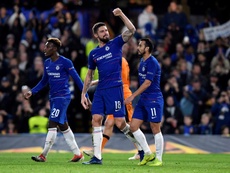 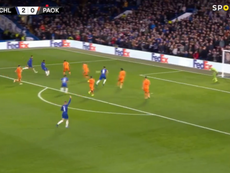 Hudsoi-Odoi made it three for Chelsea 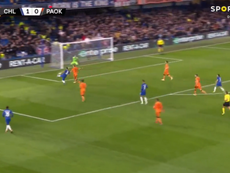 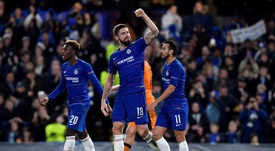 Giroud broke the deadlock with a cool finish

Chelsea V PAOK - As it happened.