Leeds United's failure to hold onto a 3-0 lead against Cardiff City means West Brom end Saturday at the Championship summit.

West Brom sit at the top of the Championship after Charlie Austin's double helped them to a 3-2 win over Birmingham City in Saturday’s early game.

Leeds United looked set to reclaim first place later in the day but threw away a three-goal lead at home to Cardiff City to draw 3-3. Preston North End are now 10 points behind Marcelo Bielsa's side after a 2-1 win over Luton Town, while Brentford leapfrogged Fulham into fourth with a slender 1-0 win.

At the other end of the table, rock-bottom Barnsley registered a remarkable 5-3 win over QPR but Middlesbrough slumped to a 3-1 defeat at Swansea City.

Charlie Austin took his tally for the season to eight with a brace to help West Brom record a vital win at Birmingham City. Slaven Bilic's side looked set for a first defeat in 12 league games after Lukas Jutkiewicz and Harlee Dean had scored either side of Grady Diangana's goal.

Austin drew his side level three minutes after being introduced, though, when he flicked up Jake Livermore's pass and rifled a half-volley past Connal Trueman. The 30-year-old sealed all three points nine minutes from time, powering home Darnell Furlong's cross with his head.

Leeds conceded three goals inside the final 30 minutes to miss the opportunity to quickly reclaim top spot from the Baggies.

Helder Costa gave the hosts a wonderful start at Elland Road, scoring after six minutes, before Patrick Bamford struck twice to open up a commanding lead. However, Lee Tomlin gave the Bluebirds hope with a goal on the hour mark to spark an unexpected comeback. Sean Morrison added another with eight minutes remaining, before receiving his marching orders four minutes later for a late tackle. Their numerical disadvantage did not daunt the visitors, however, as Robert Glatzel struck with two minutes remaining.

Jayden Stockley scored with six minutes remaining to help Preston beat Luton and climb to third in the table. Paul Gallagher opened the scoring early on, slotting home after his penalty had been saved, before James Collins levelled from the spot.

Brentford, meanwhile, are a point behind Preston in fourth after Bryan Mbeumo scored the only goal of the game against Fulham. Sheffield Wednesday are level on points with the Bees, the Owls cruising to a resounding 4-0 win over Nottingham Forest at the City Ground thanks to a first-half hat-trick from Jordan Rhodes.

Barnsley moved to within four points of safety as Conor Chaplin's hat-trick helped them to a stunning win over QPR at Oakwell. Cauley Woodrow and Bambo Diaby were also on target in what was only the Tykes' third league win of the campaign.

Fellow strugglers Stoke City and Wigan Athletic were held to 0-0 and 1-1 draws by Reading and Huddersfield Town respectively. 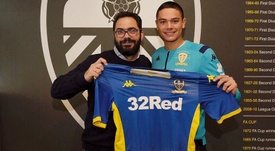