Cannavaro sees Messi at Inter... Because of Italy's tax laws

With the shadow of Messi's possible departure from Barcelona at the end of the season, rumours surrounding a possible future team are swirling. For the former Madrid player Fabio Cannavaro, Inter Milan would be an ideal place for the Argentinian, especially because of Italy's "new tax system".

The clash between Leo Messi and the Barcelona's board reopened the debate surrounding the star's future and once again sparked rumours of a possible departure. His contract allows him to leave for free whenever he wants, after all.

Since then, the football world has not stopped wondering where he could end up. If he does leave, who will make room for him? Where would he fit in? PSG, Manchester City, United, Juventus. But in the eyes of Fabio Cannavaro, the Argentinean superstar would fit in perfectly elsewhere, as he pointed out in an interview with La Gazzetta dello Sport.

"I'd love to see him in another shirt, and with the new tax system in Italy he could try it out. Inter seems to me to be the club best prepared to make the move," said the former centre-half, who played for the Neroazzurri two years before joining Juventus and Real Madrid.

However, the arrival of a star like Messi to bring it closer to the duel with Cristiano Ronaldo would not be enough to make Serie A the best league in the world.

"It's a very strong championship, but the infrastructure matters and we're still behind Premier, La Liga and Bundesliga. We still have a lot of work to do," said the 2006 world champion. 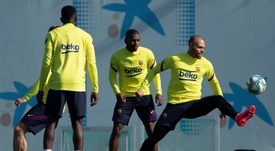