Muzamiru Shaban scored two minutes into the second half to give KCCA a 1-0 home victory over Saint George of Ethiopia in a last-32 second leg and overall success by the same score.

Swallows also triumphed 1-0 on their ground, over Zanaco of Zambia, to advance 3-1 on aggregate with Wonder Nhleko scoring the lone second-leg goal.

Both KCCA and Swallows reached the group phase of the second-tier CAF Confederation Cup last season for the first time and have continued to improve.

Rollers were held 0-0 at home by Young Africans of Tanzania, but qualified 2-1 on aggregate having won by that scoreline in east Africa last week.

Botswana clubs have been perennial strugglers in both CAF club competitions, making the progress of Rollers all the more remarkable.

Horoya exceeded expectations by winning 2-0 away against Generation Foot of Senegal in a west African showdown having battled to succeed by a single goal at home.

A Daouda Camara penalty midway through the first half put Horoya ahead and a late goal assured the Conakry club of a place in the group draw next Wednesday.

Another three clubs, Gor Mahia of Kenya, Port of Togo and Rayon Sports of Rwanda, hope on Sunday to become the first clubs from their nations to reach the mini-league stage.

Defending champions Wydad Casablanca of Morocco were comfortable overall winners despite a 2-0 away loss to Williamsville of the Ivory Coast.

Goals late in each half from Romuald Kouassi and Kouame Diallo gave the Ivorians victory, but they faced a hopeless task after being trounced 7-2 in Morocco.

Record eight-time title-holders and 2017 runners-up Al Ahly of Egypt triumphed 3-1 away to Mounana of Gabon after taking a four-goal advantage to central Africa.

TP Mazembe, the second most successful club in all CAF competitions behind Ahly, scraped through after a shock 3-0 hiding by Songo in Mozambique.

Leading 4-0 after the first leg, the multi-national outfit based in Lubumbashi fell behind in the first minute when Helder Pelembe scored.

Primeiro Agosto reached the group stage for the first time since 1997 by edging Wits of South Africa 3-2 in a Johannesburg penalty shootout after both clubs won 1-0 at home.

Geraldo, who scored the first-leg winner, converted the decisive spot-kick, calmly stroking the ball into the net after Wits goalkeeper Darren Keet screamed at him. 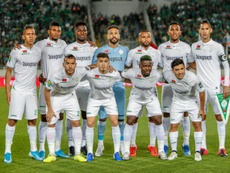 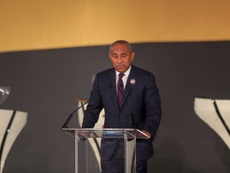 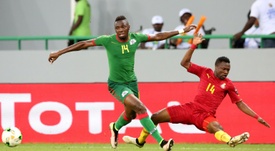