Hertha Berlin midfielder Ondrej Duda scored his fifth goal in as many league games on Friday as Bundesliga leaders Bayern Munich suffered a shock 2-0 away defeat.Â

Berlin were deservedly 2-0 up at half-time at the sold-out Olympic Stadium in front of 74,669 fans, stunning Bayern thanks to a Vedad Ibisevic penalty before Slovakia's Duda, the league's top-scorer, added a stunning second.

It also came at his old club and at the worst possible time with a Champions League game at home against Ajax taking place on Tuesday.

Hertha coach Pal Dardai celebrated his first win over Bayern -- the club's first victory against Munich since 2009 at the 15th attempt.

Berlin climbed to second, level on 13 points with Bayern but the Bavarian giants could be knocked off the top on Saturday if their rivals win on the road.

Borussia Dortmund, who are at Bayer Leverkusen, and Werder Bremen, who are at Stuttgart, are only two points behind.

Bremen and Dortmund are now the only unbeaten teams in Germany's top flight.

Bayern were that crucial half a metre short of where they needed to be while Hertha snapped up every chance on Friday.

It was the first time Bayern found themselves 2-0 down at the break in a Bundesliga game since November 2017, when losing 2-1 at Borussia Moenchengladbach.

Kovac made five changes from the side which conceded a late equaliser in Tuesday's 1-1 draw at home to Augsburg.

Yet even with their stars, Bayern could not break the Berlin defence.

Hertha made their first clear chance count when Duda played a superb diagonal ball into the area.

Bayern goalkeeper Manuel Neuer parried Ibisevic's header, but the ball bobbled out to Salomon Kalou, who was brought down on the right side of the box by Jerome Boateng.

The referee pointed to the spot and Hertha captain Ibisevic converted the penalty with 22 minutes gone.

The second Hertha goal was simple and brutally effective.

Kalou put a pass in behind the defence to left-back Valentino Lazaro, who produced a close-range cross which Duda slammed into the net on 44 minutes.

Such was the speed of the shot that neither Bayern centre-back Niklas Suele nor Neuer had time to react.

In an effort to turn things around, Kovac brought on Germany forward Thomas Mueller for Arjen Robben and winger Serge Gnabry for Renato Sanches.

It just was not Bayern's night and even a long-range attempt from their free-kick specialist David Alaba flew harmlessly wide. 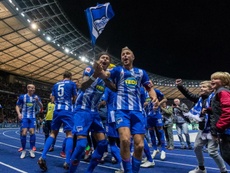 Bayern back in Berlin for DFB-Pokal revenge 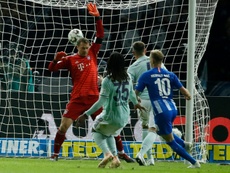 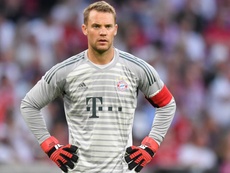 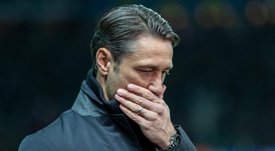 Five things to look for in the Bundesliga

Hertha out to ruin Kovac's Berlin homecoming with Bayern