BeSoccer 21 days ago 6.4k
Barcelona will only go for Pogba if the player agrees to a pay cut. AFP
Paul Pogba is one of the names on Barcelona's list for the 2022-23 season, but the Catalan side have made it clear they will not get into financial battles with other big clubs. 'Sport' says this is because they do not want to and they cannot because of their financial situation. They will only try and sign him if Pogba agrees to a reduction in his salary.

Barca president Joan Laporta is dreaming big about a project for the future. He would love to have Dani Olmo, Erling Haaland and Paul Pogba.

The Catalans narrowly missed out on signing a midfielder in the last transfer window. They wanted Wijnaldum, but PSG got there first and sealed his signature after the Dutchman's Liverpool contract ended.

Now, the player who is set to become a free agent is Paul Pogba. If United cannot persuade him to sign a new contract, he will be free to sign with whoever he wants in January. In summer 2022, he would go for nothing to the club of his choice.

Barcelona are trying to weigh up Pogba. He is on their list of targets, but under one condition. 'Sport' says that the club are not going to splash the cash out on him: firstly because they cannot accept it financially and secondly because they are not keen on spending a fortune on the Frenchman.

In addition, Barcelona are not only thinking about the money they would have to pay Pogba, but also the money Mino Raiola would get... And they do not want to enter into disputes.

The La Liga outfit are clear: if Pogba wants to play for Barca, he can play for them. However, the midfielder will have to accept a reduction in salary like the current Barca players are doing because of the club's delicate financial situation.

Pogba is liked a lot by the board. It just needs the footballer to prioritise the sporting benefits of being at Barca over money. Otherwise, the club will not take him: they are refusing to get into a bidding war with the likes of Juve and PSG who are also interested in the United man. 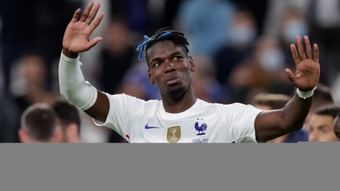