Here we take a look ahead of Atletico Madrid playing Monaco in the Champions League at Estadio Metropolitano.

Atletico Madrid: Finalists twice in the last five years, the 'Colchoneros' look favourties to top this group and take a step closer to reaching another final to be played at their season.

The home side will still be missing their key defenders in Juanfran, Diego Godin and Jose Gimenez, while Diego Costa could miss out too.

Monaco: The French side have struggled in the Champions League and domestically this season, and will not be able to qualify, but would be able to put pressure on Brugge in the Europa League place in third.

The French side have no injury concers, with Radamel Falcao having returned to fitness last weekend.

Atletico Madrid manager Diego Simeone on criticism of his tactics:

"I don't think too much about it [whether or not Atletico are respected], as I just try to find solutions to be able to compete and to continue being in the best positions in the league, the Champions League and the cup,"

"[Tomorrow] I hope we can have a good match, we need to get into the last 16 this Wednesday night."

Monaco manager Thierry Henry on the respect he has for his opposite number:

"People always speak about Atletico and say that they only play on the counter attack, but that's not true. He is extraordinary and it's an honour to be by his side.

"Tomorrow I'll take on Atletico and we know what we'll have to cope with against a team that doesn't give you anything."

Atletico Madrid have failed to score more than three goals in any of their last 18 matches in all competitions.

Monaco have won only twice in all compeitions this season, but both were away from home.

This will only be the second time the two sides have faced each other, the first being Atletico's 2-1 win in the previous fixture. 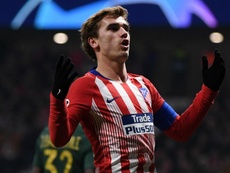 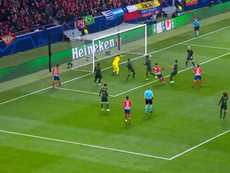 Griezmann stroked in a second for Atletico Madrid 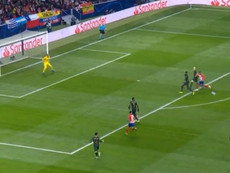 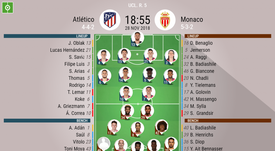 Atlético V Monaco - As it happened.