Arsenal came back from 2-0 down to draw 2-2 at Standard Liege and make sure of a place in the Europa League last 32 as Group F winners on Thursday.

Alexandre Lacazette and Bukayo Saka were on target in the space of three second-half minutes.

The Gunners, runners-up to Chelsea last season, finished the group stage with 11 points and a relatively easier draw in the knockout rounds.

They lived on their nerves as Eintracht Frankfurt were poised to knock them off top spot when the Germans led Guimaraes 2-1.

However, the Portuguese side, already eliminated, scored twice in the last five minutes to claim a 3-2 win.

Arsenal had beaten Liege 4-0 in the first meeting between the two sides and with a place in the knockout round already virtually certain, caretaker coach Freddie Ljungberg made nine changes to his starting line-up in Belgium.

The home side took the lead just after half-time when a speculative Samuel Bastien shot took a huge deflection which left Gunners goalkeeper Emiliano Martinez wrong-footed.

The goal meant Arsenal had failed to keep a clean sheet in their last 13 matches in all competitions, equalling their worst ever run under Arsene Wenger in 2004.

It got worse after 69 minutes when Selim Amallah made it 2-0 off another deflection as Liege looked for the unlikely scoreline of 5-0 which would put them through and Arsenal out.

However, Lacazette calmed Arsenal nerves after 78 minutes when he headed in a cross from Saka.

Three minutes later, the impressive Saka levelled the scores with a fine finish from the edge of the box.

Frankfurt had beaten Arsenal in London last time out with a win which hastened the departure of Gunners coach Unai Emery.

They were on course to finish top of the group after Danny Da Costa and Daichi Kamada gave them a 2-1 lead over Guimaraes.

However, Libyan midfielder Ali Al Musrati and English winger Marcus Edwards scored in the 85th and 87th minutes to leave Frankfurt in the runners-up spot.

Elsewhere, Celtic, fresh from winning the Scottish League Cup last weekend and already assured of making the last 32, lost 2-0 at Cluj who went through as Group E runners-up behind the Scots.

Italian giants Lazio, third in Serie A, were knocked out after a 2-0 loss at Rennes in the same group.

Later Thursday, Manchester United manager Ole Gunnar Solskjaer made nine changes to the side that beat Manchester City at the Etihad last Saturday for the home tie with Alkmaar.

Both United and their Dutch visitors were already assured of making the last 32 although with just a point between them, top spot was at stake in Group L. 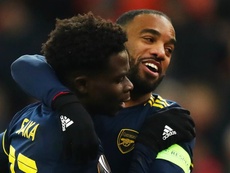 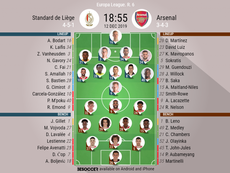 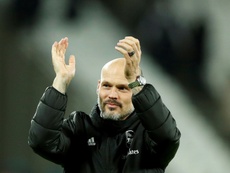 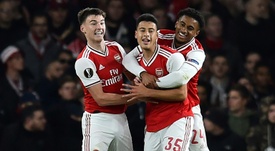