A late leveller from Ismael Traore put the brakes on Marseille's bid for Champions League football next season as the southern giants were held to a 1-1 draw at Angers on Sunday.

Marseille travelled west hoping to move into the Ligue 1 top three after Monaco were held to a scoreless draw at home to Amiens on Saturday as Lyon took second by beating Nantes.

Paris Saint-Germain wrapped up the title with plenty of room to spare two weeks ago.

On paper, three points were well within Marseille's grasp. Coach Rudi Garcia certainly appeared to believe so as he left both Dimitri Payet and Kostas Mitroglou on the bench ahead of Thursday's Europa League semi-final second leg at Salzburg.

But despite a third-minute penalty from Florian Thauvin, misfiring Angers finally got back on level terms thanks to Traore's header from a free-kick on 79 minutes.

Marseille remain fourth, one point behind Monaco in the third and last Champions League qualifying position.

After Monaco's slip-up, motivation should not have been an issue for Marseille at the Raymond Kopa stadium.

But Garcia's men struggled to build on the early lead provided by Thauvin after Abdoulaye Bamba had fouled Valere Germain during the first corner of the game.

In wet and slippery conditions both keepers were kept on their toes. Marseille shot-stopper Yohann Pele produced a great one-handed save to thwart Flavien Tait from a tight angle minutes before the interval.

But Ludovic Butelle was the busiest of the pair, the 35-year-old forced into action quickly after the restart to charge down Jordan Amavi's angled strike before palming a wicked curling effort from Thauvin over the bar moments later.

The greasy pitch made for a scrappy affair with passes, and shots, going astray. But not even those challenges were an excuse for Angers missing a golden chance to level on 70 minutes.

Karl Toko Ekambi's run through the middle into the area saw the ball stop dead, with Pele stranded. Yet, faced with an empty goal, Thomas Mangani sent his effort high over the bar from 16 yards out.

But the home fans were finally given reason to celebrate when Traore rose highest at the back post to meet Tait's free-kick from deep on the left and fire a header past a rooted Pele and into the bottom corner.

Earlier, Rennes boosted their hopes of fighting for a Europa League place with a precious 2-1 win over Toulouse that pushed the Brittany side up one place to sixth. They are now just one point behind fifth-placed Saint-Etienne. 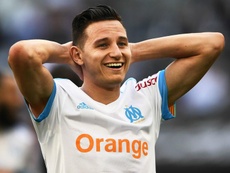 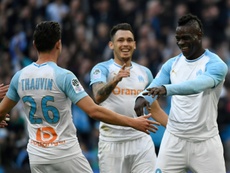 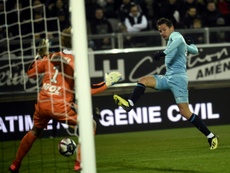 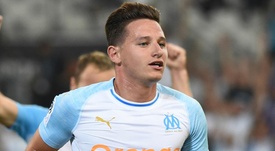